JDK 12 development is ramping down with a targetted release in March. This hopefully means things will be pretty stable from here on out.

Disclaimer: everything below is subject to change.

That said, allow me to follow up on my notes on startup from 8 through 11 with some fresh data points: 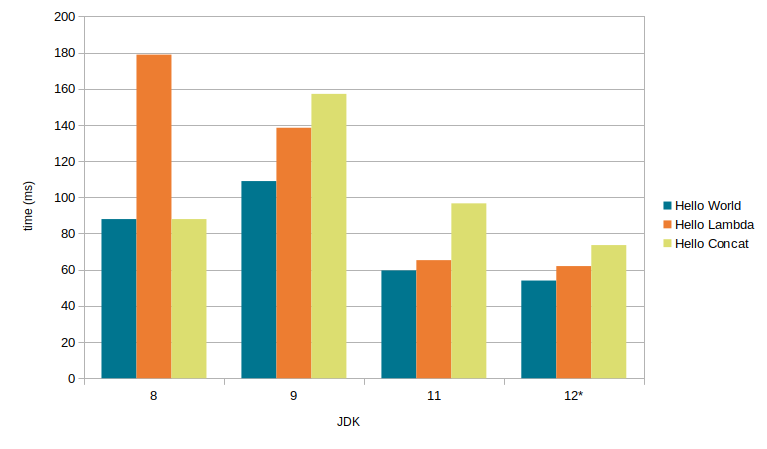 (*note that JDK 12 numbers are preliminary)

To showcase the initial startup overhead, the Hello Concat numbers in the graph above measures the time to run the following simple program (compiled using the respective JDK’s javac):

Some overheads left, but we’re now beating JDK 8 on my machine. (Victory!)

If you care about startup and aren’t enabling CDS, you’re missing out!

All the above data points above are with basic CDS enabled. Disabling it would tell a very different story (latest JDK 12): 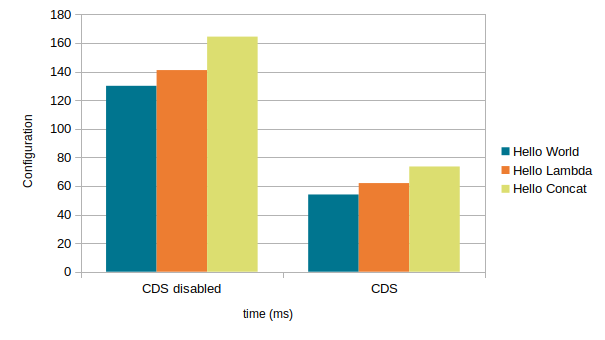 Yes, default CDS means a 55-60% startup time reduction in these small tests. (The default CDS archive most likely won’t give you 60% on any real application, but 50% reductions isn’t unheard of if you deploy with AppCDS enabled)

However - historically - to enable just the default CDS you had to:

Which is easily forgotten and might not be possible if you don’t control the deployment environment. In JDK 12, none of this is necessary (but won’t hurt).

So: faster startup for free - no actions required!

Not only is this a bit faster than allocating objects in the interpreted stages of the JVM bootstrap, but also allows for better sharing between JVMs (the archive regions can be mapped in read-only and safely shared between processes).

Even better(?): when applied strategically it can avoid executing large chunks of code altogether. A few object graphs that are unconditionally created early on in the JVM bootstrap were picked to pioneer use of this feature, which helped shave a substantial number of milliseconds off of bootstrap. Example: JDK-8202035

Unfortuntately there are some startup regressions that eat into the gains we’ve seen from CDS heap archiving etc.

One of these has been identified and resolved very recently, but has not made it into JDK 12 EA builds just yet.

Another known issue is due a rewrite to use concurrent hash tables for a few VM internal tables (JDK-8208142). There might be time to get some fixes into JDK 12, but as things stands it’s not really a blocker so I fear work to improve in this area will be pushed off to the next release.

Overall JDK 12 has improvements and a few regressions that add up to a small startup improvement. ISC startup overheads has been significantly reduced.